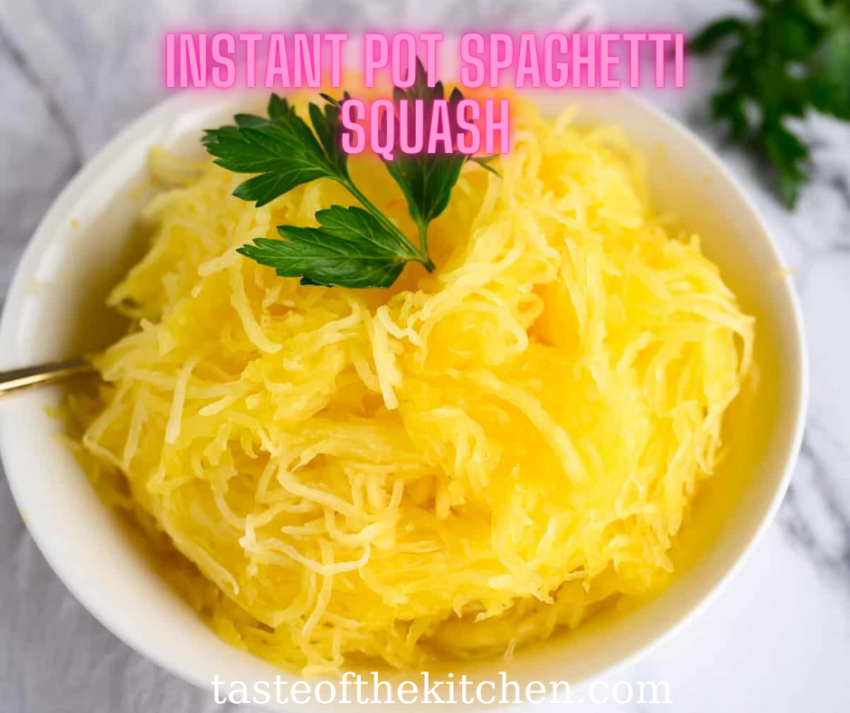 This Instant Pot Spaghetti Squash is a quick and easy way to cook spaghetti squash. Use it in your favorite spaghetti squash recipes or enjoy it as an alternative to pasta.

Use a fork to scoop the strands of squash out onto a plate and top with marinara sauce and Parmesan cheese, or use the squash halves as “bowls” and fill them with your favorite toppings. We also love to enjoy spaghetti squash as a healthy side dish, topped with a little butter or olive oil, salt and pepper.

If you are new to Instant Pot cooking, read my simple Instant Pot instructions for help with getting started, and then try this Instant Pot spaghetti squash recipe. It’s a great simple recipe for beginners to pressure cooking! You can find all of my Instant Pot recipes here. 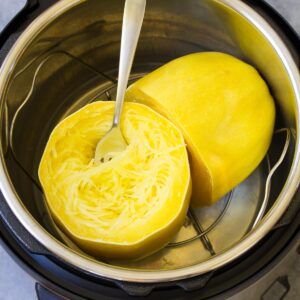 Spaghetti squash has a very mild flavor. Since it doesn’t have much flavor on its own, it’s great for using in a variety of recipes with different flavors. Topped with marinara sauce and Parmesan cheese, I find it to be a delicious substitute for spaghetti pasta.

The main difference that I find between spaghetti squash and spaghetti pasta is that the squash has more of a bite to it, while pasta is softer.

HOW TO CUT SPAGHETTI SQUASH

For the longest strands of spaghetti squash, you’ll want to cut it crosswise, not lengthwise. You’ll need a sharp knife. I find that a large serrated bread knife cuts through the squash most easily. A sharp chef’s knife also works well. 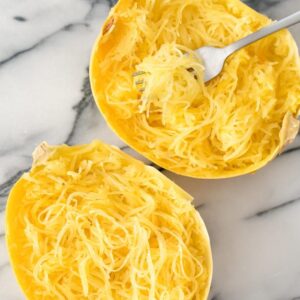 HOW TO COOK SPAGHETTI SQUASH IN THE INSTANT POT

If you do want to cook your squash whole, you’ll still have to slit it through to the center of the squash to allow steam to escape, which in my experience is not much easier than just cutting the squash in half to begin with.

HOW TO COOK SPAGHETTI SQUASH WHOLE

To cook a whole squash in your Instant Pot, first pierce it with a sharp knife to allow steam to escape as the squash cooks. Make sure that the knife cuts all the way through to the center of the squash.

Cook the whole squash in your Instant Pot using the same method as squash halves, increasing the pressure cooking time to 20 minutes at high pressure for al dente squash. If you like your squash softer or if it is very large, add a few minutes to the cook time. Quick release the pressure when the cook time ends.

Let the squash cool slightly and then cut it in half. Scoop out the seeds before separating the spaghetti squash strands.

HOW LONG DOES SPAGHETTI SQUASH LAST?

When stored in a cool, dry place, such as your pantry, an uncut spaghetti squash will last for 1 to 3 months. Avoid storing uncooked spaghetti squash in the refrigerator, as that can change the flavor of the squash and may make make it spoil faster.

A spaghetti squash should be firm and free of soft spots or dark spots. The stem should be intact and dry.

After cooking, leftover spaghetti squash can be stored in the refrigerator for up to 4 days. 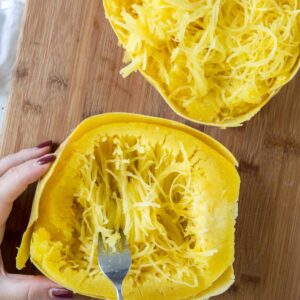 This site contains affiliate links. If you make a purchase through these links, I may receive a small commission, at no extra cost to you. Thank you