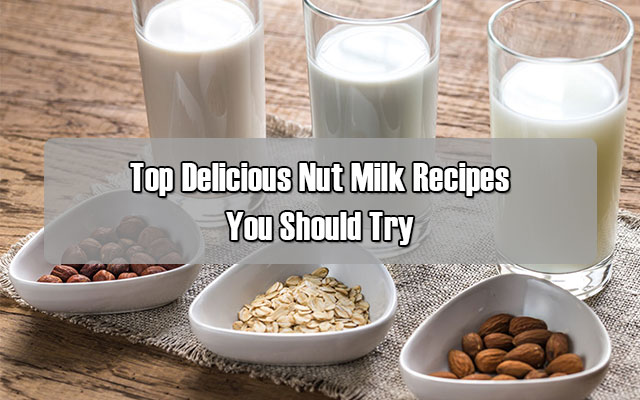 Top Popular and Easy Nut Milk, and in general, milk from plants (like nuts, beans, grains, etc.), almond milk, cashew milk, and carrot milk are the three most popular and preferred drinks.

Aside from their rich content of nutrients, the flavor is no joke. In fact, they are used popularly in the smoothie and desserts because truth to say their color, taste, and texture are even better than cow’s milk – very vegan-friendly.

In this article, other than guiding you top three popular milk recipes from nuts/seeds, I will share some others about alkaline green veggies but don’t fret, they are actually easy and tasty to drink.

Might this recipe be so popular with you, right?

Almond milk does not have as much glycemic as rice milk, nor worry about hormone or GMO disorders such as soy milk while less than 50% more calories than cow’s milk, and no cholesterol but less protein.

Basically, almond milk is made from almonds and water. The step-by-step method as follows also the method that is applicable to most nuts (nuts, walnuts, macadamia, etc.). The fact is that I prefer cashew nuts rather than almonds (fresh cashew nuts, not salted cashew nuts), because it is cheaper, and especially faster to make because you don’t have to peel them off, just soak, blend, and filter.

This drink is suitable for both non-vegetarians and vegetarians. Anyone who abstains from milk and who is allergic to nuts can make coconut milk.

Pour the almonds into water (the amount of water should be double the number of nuts to soften them better). Soaking time is at least 8h (preferably overnight). If you are in a hurry, you can soak up less time than that (soaking in hot water).

NOTE: If the weather is hot, it should be soaked in the refrigerator to avoid yeasting, making the milk easily get sour and out of date.

Boil almond nuts for 5-10 minutes. Or, you can skip this step. The purpose of boiling is to make the nuts easier to peel off their nuts and to give some relief to those who do not like the taste of the raw almonds.

Blend the seeds together with the water in 1-2 minutes. During the grinding time, you should pulse several times to secure the machine. It is best to use a blender that is generally used in homes where the countertop is usually better than a handheld. The more powerful the machine, the smoother the milk.

Filter the mixture through a filter sieve or filter canvas bag.

If using a sieve, milk is still quite a lot of pulps. So, with almond milk, I prefer using a filter canvas bag to get a smoother texture.

Add some salt, and some sugar (if you want), and be ready to serve.

Or, just pour the milk back into the blender, and blend with some palm fruits, cinnamon, or other varietals if you want. This milk recipe is easy to drink by the children so mother if you want to alter the daily milk with healthier and safer milk, try this. After the very first time trying, you will see that the total time of milking is very quick, only take time to soak the nuts overnight.

Almond milk should be preserved in the refrigerator, keep it cool and use maximumly within 3 days. For safety, you can warm it up before drinking.

I have tried this recipe with some palm fruits and a little cinnamon powder, very satisfied. In addition to the way you mentioned, there is another way to make plant milk by blending the raw seeds and then boiling them up. This way, if applied with some nuts such as almonds and walnuts, you will need to be very careful when boiling them after blending, because if boiling in the big heat, they will be precipitated. So, while boiling such milk recipes, keep the small-medium heat while stirring constantly.

This milking process can be applied to other nuts, only differ from the time to soak them: The reason why I’d prefer cashew nut milk more is its much more affordable price compared to other nuts.

Secondly, it’s really easy to carry out, do not need to peel them off like almonds, no need to boil or steam, and taking less time to soak. Briefly, it just takes 1 hour for soaking, then purees, no need to filter (it releases almost no residue).

In addition, it can replace cow’s milk in all other recipes such as milkshakes, vegan cheese, ice cream, soup, etc.

The most important thing to do to make the best nut milk is NUT’S QUALITY.

With cashew nut milk, we have to choose raw cashew nuts without marinating. They should be white, with no black spots or mold. The best storage is in the freezer or at least, keep it cool in the refrigerator.

Cashew nuts provide protein, vitamins E and vitamin B, as well as minerals such as iron, calcium, and magnesium. In terms of fat, the content in cashew nuts is lower than in peanuts, almonds, and walnuts. However, we should not use them daily, but change the variety of different nuts.

Now, here are two simple steps to have a delicious cup of cashew milk:

Soak the nuts in water for about 1 hour. You can add some salt or lemon juice/vinegar to whiten them more. Be aware of soaking at room temperature. Remove the water, and rinse the nuts some more times.

Next, add cashew nuts, water, and some salt into a blender. Puree them at the highest speed within 1 minute. If your blender isn’t powerful enough, puree them for some more time to ensure the smoothest mixture.

Now, ready to drink. If you want to enjoy it later, pour it into a glass jar, cover it tightly with a lid, and place it in the fridge. This drink can last up to 2 days at cool temperatures.

If you want to color up this drink, here are my tips:

Use a high-capacity blender. You should use a table-stand blender, as the handheld design will not be as such powerful. In general, a 600W or more is OK. If the machine is weaker then you need to puree it many times to get the smoothest texture.

If storing nut milk in the fridge within a day, you will see it’s divided into two layers: one savory-colored layer of milk and one crystal clear layer of water. It’s a common issue of nut milk, don’t worry, just shake it evenly before use.

This is the basic formula if you like fatter nut milk, or denser, increase the number of nuts or reduce the amount of water. And vice versa, if you prefer more loose milk, add more water when blending.

If you do not have time to soak the nuts and are in a hurry then soak them for 15-20 minutes in hot water to boost the nuts themselves to soften more quickly.

Many kinds of plant milk mixed with fruit juices are very tasty (such as banana milk is super delicious), and it’s even better to mix unsweetened vegetables, like carrot milk.

Carrot milk is sold widely in supermarkets and cafes in many countries such as Malaysia or India as a casual drink.

This ingredient is also basically made from three ingredients: carrots (cooked or juiced raw), and milk (cow’s milk or plant milk), add some extra ingredients to soup up the drink (like cinnamon, cardamom saffron, ginger, etc.) and sweetener (sugar, honey, maple syrup, or natural palm fruits). That’s it! Simple but delicious! Besides, they can be preserved longer in the fridge.

There are several versions of carrot milk:

Slice carrot, steam, or boil, then puree in a blender. Meanwhile, heat up the milk, and add in some other ingredients (optional, based on your preference) and sweetener. Note that if using almond milk, you don’t need to boil it up, or if you want, kindly cook in very small heat. Next, blend with the carrots to puree.

Option 2: which is also my method to make Top Popular and Easy Nut Milk

Juice the carrots out with a juicer. Then, mix it with almond milk. Add cinnamon powder, peanut butter, and honey. Blend it up and enjoy.

Almond milk is already tasty, now it’s souped up with carrot juice and the aroma of butter, honey, and cinnamon, which is even better. I usually drink it cool. If you want to drink warm, heat it up with ginger (when juicing carrot, add some slices of ginger as well), very comfortable to drink. Kids like it, too.

For those who don’t have a juicer, make it with a blender. Puree all the almonds and carrots when making milk and filter well.

People like to make milk with cooked carrot-like in option 1. You can add some milk to soup up the drink. However, I’m a fan of juice, so raw is raw. Besides, veggies after being cooked will lose its vitamin and mineral rather than eating raw. And I make vegan, no cow milk or condensed milk.

This milk can last at least 2 days if preserved at a cool temperature in the fridge. It’s very flavorful!

Truth to say, this formula has been edited from the original in the book named “The pH Miracle: Balance Your Diet, Reclaim Your Health” written by Robert O. Young, Ph.D., D.Sc.

He is a nutritionist and microbiologist, also a worldwide speaker on health and wellness. The book focuses on the key message: the pH balance in the body is the key to optimal health, ideal weight, and mental clarity.

This balance can be achieved by nourishing the body with alkaline foods, thereby reducing health problems such as poor digestion, overweight, poor energy, pain, and diseases. The book contains many recipes for alkaline foods, selected from those ingredients such as tomatoes, lemons, grapefruit, green vegetables, avocados, sprouts, and seeds.

If you have tried almond milk at home, you will find it quite simple and delicious as well. If you have a juicer, you can try this rich alkaline milk formula.

Cucumber brings alkaline salt and provides water with very low calories. They are also scientifically indicated to have anti-inflammatory and antioxidant properties.

Spinach is rich in chlorophyll and contains vegetable proteins. Also, it is top of the list of healthiest vegetables. Stevia is rich in both vitamins and minerals and has very high antioxidant properties.

Pour the green juice into almond milk, stirring and you will get 1 liter of Green Almond Milk.

This drink can be put into a bottle covered with a lid and placed in a refrigerator or cooler for up to 2 days.

This is a rather strange combination. I know you may be a little shy but do not worry. It is cool and easy to drink with a light aroma and very light green color.