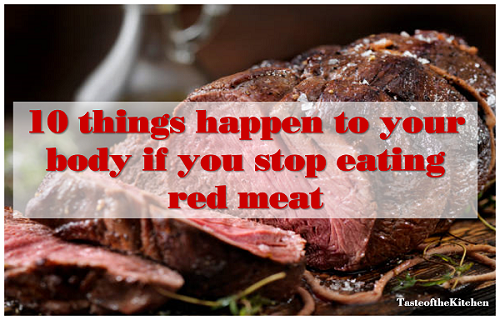 Whether you’re looking to save animals or protect the environment or tweak your diet, here’s how you can expect your body to change when you boot red meat from the menu.

Red meat is calorie-dense. Cut it out of your daily diet and you could see a lower number on the scale. “Most portions of meat are more than the actual protein requirement,” says Sally Warren, PhD, traditional naturopath at Metro Integrative Pharmacy. “A three-ounce serving of beef can be around 170 calories. But a portion of beans can be around 100 calories and tofu around 70 calories.”

It may not seem like a huge difference at first, but it can add up over time. A 2015 review article in the Journal of General Internal Medicine reported that people on a vegetarian diet lost more weight than those on a non-vegetarian diet. And vegans shed more weight than people who still ate eggs and dairy products.

Healthy bodies need a good pH balance. But much of the modern convenience diet today is comprised of acid-forming foods, including red meat. “Red meat produces a high acidic load for the body to absorb and neutralize,” explains Warren. “Plus, high acidity in the body creates the perfect environment for disease. Add stress and poor sleep to the mix and you’ve lowered your resistance to high-mortality illnesses like cancer and diabetes”.

3. You may feel less bloated

The body digests red meat more slowly than it does other foods, which is why you may feel constipation, abdominal pain, and increased gas after a jumbo steak dinner.
While you may experience some indigestion right after you cut out red meat, it’s mainly the result of eating healthier, fiber-rich foods. In the long-term, you’ll add healthy bacteria in your gut, which could lower body-wide inflammation and make you feel less bloated to boot. In fact, a 2015 study published in the journal Nutrition Research found that vegetarians had lower rates of inflammation than meat-eaters.

Clear skin begins on the inside. Load up on fruits and vegetables, which also happen to be loaded with vitamins like A, C, and E that are known to fight blemish-causing free radicals.

5. Your cholesterol levels may drop

Cut out red meat and you’ll reduce the number of saturated fats, which have been linked to higher cholesterol levels. The American Heart Association recommends getting no more than 5 to 6 percent of your daily calories from saturated fat. This balance reduces the risk of having high cholesterol, which can lead to the buildup of plaque in artery walls, says Warren. “This buildup is called atherosclerosis, which can lead to coronary artery disease (CAD), heart attack, stroke, or transient ischemic attack (TIA) and peripheral arterial disease, says Warren. While high cholesterol can be linked to your genes, trimming out red meat will go a long way toward helping reduce your body’s levels. So will taking these other cholesterol-lowering steps.

6. You could slash your risk for certain cancers

Ban beef and you may sidestep colon or bowel cancer, especially if they run in your family. “Diets high in saturated fat have been associated with increased inflammation within the body, and chronic inflammation has been linked to the development of cancer,” says Warren.

In 2015, the World Health Organization (WHO) classified red meat as a possible carcinogen, meaning it could possibly cause cancer. “There have been reports linking a high intake of red meat to increased risk of cancer, particularly colon cancer,” says Adrienne Youdim, MD, the director of the Center for Weight Loss and Nutrition in Beverly Hills.

A 2019 study in the International Journal of Epidemiology found that eating an average of 76 grams (about 2.6 ounces) of red or processed meat a day was associated with a 20% higher chance of developing colorectal cancer as compared to consuming only about 21 grams a day. Cooking red meat at high temperatures triggers the production of several compounds that may cause bowel cancer in people with a genetic predisposition. Processed red meat, like hot dogs and sausage, also has nitrites, both naturally and as added preservatives. Nitrates are thought to contribute to cancer.

7. You could reduce your risk of serious diseases

Taking red meat off the menu could reduce the risk of multiple diseases. “Red meat can contain high amounts of saturated fat, which is linked to increased risk of cardiovascular disease, obesity, and diabetes,” says, Warren.

A 2018 study in the European Heart Journal found red meat consumption produces a compound that may raise the risk of heart attacks.  Carnitine, which causes the body to produce Trimethylamine-N-oxid (TMAO), a compound produced by bacteria in the stomach, appears to correlate with risk. “Researchers believe that it affects the body’s metabolism of cholesterol, which leads to enhanced development of plaque on blood vessel walls, and can increase risk of heart disease,” Warren says. Beefeaters may also be courting Alzheimer’s disease. A 2017 study published in the British Medical Journal blamed the link on excessive iron accumulation from too much red meat in the diet. Want to do more to lower your Alzheimer’s risk? Consider taking these vitamins.

8. Stop eating red meat help you may have more energy

“We need a healthy heart, a healthy digestive system, and a healthy mind and body for good energy,” explains Warren. Swapping red meat for healthier foods, such as beans, plant-based fats, whole grains, fruits, and vegetables, can result in higher energy levels.

Raising animals for food requires massive amounts of land, feed, energy, and water. A staggering 51 percent or more of global greenhouse gas emissions are caused by animal agriculture, according to a report published by the Worldwatch Institute. Each year the livestock sector produces 59 million tons of cattle and buffalo meat globally and 11 million tons of meat from sheep and goats. Americans eat 270 pounds of meat per person per year, on average. In other countries per person average of around four pounds. Choose alternative sources of protein to reduce this damage significantly.

10. You may fall short on certain nutrients

Though it’s possible to make up for the lost protein in your diet, some nutrients do come mainly from red meat—and you may start running low on them if you don’t supplement.

One key family of nutrients is B vitamins, mostly vitamin B12, and the mineral iron. If you still eat shellfish, 3.5 ounces of cooked clams can supply as much B12 as beef. Other good sources are tofu and soy products, fish, cheese, and eggs. Some experts still recommend popping a supplement for insurance. “Taking supplements, including a high-quality B12, can ensure that you’re getting the correct daily dosage,” says Dr. Warren.

Many people, even those who do eat red meat are deficient in magnesium.  That’s because today’s soil is low in magnesium, so plant-based diets are no longer supplying as much of this important mineral. Even in meat, the cattle grazed on pasture or fed hay or grass pellets are not getting as much as is required to maintain a healthy daily level. Take a supplement with magnesium and vitamin D3. Also add probiotics, which provide important friendly bacteria to help the gut digest and absorb food. Check out the other key nutrients vegetarians may miss out on and how to stock up.